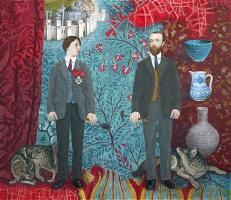 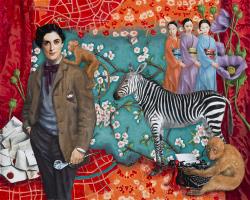 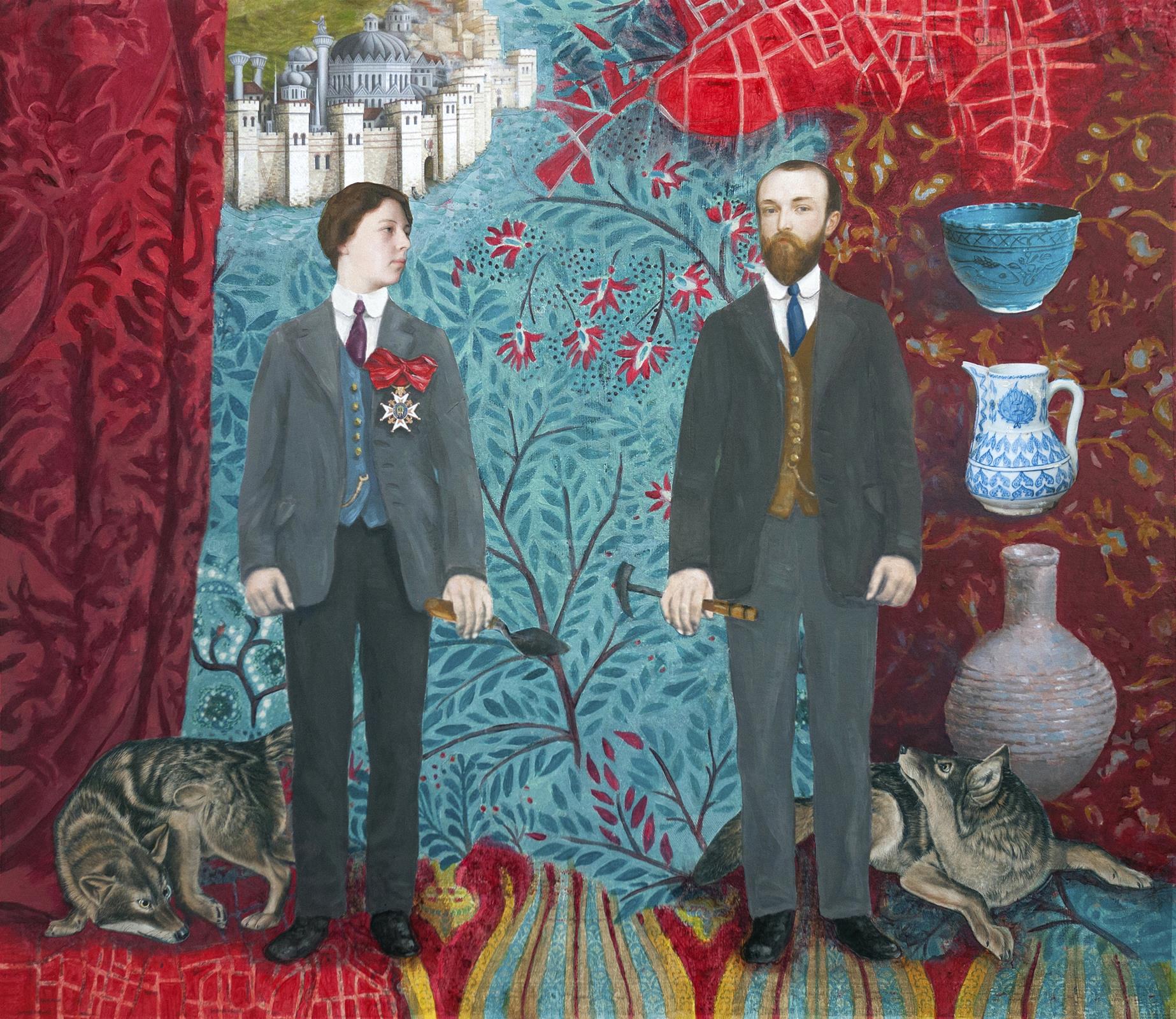 From the ‘No Man’s Land’ Series:

The title of this series of paintings ‘No Man’s Land’ relates to those who have challenged the social system of patriarchy in order to live adventurous or professional lives of discovery. The aim is to produce a portrait gallery of the hidden contributors to history - a gallery of little known protagonists who have studied, achieved and explored despite the perceived social unacceptabilty of their sex or sexuality for their chosen endeavours, and to celebrate those to whom the ‘doing’ was of greater importance than the need for personal recognition.

Jane Dieulafoy (1851 –1916) was a French archaeologist, explorer, novelist and journalist. Together with her husband Marcel-Auguste Dieulafoy, she is known for her excavations at Susa. For her contributions to archaeology, the French government conferred upon her the title of Chevalier of the Legion of Honor in 1886. 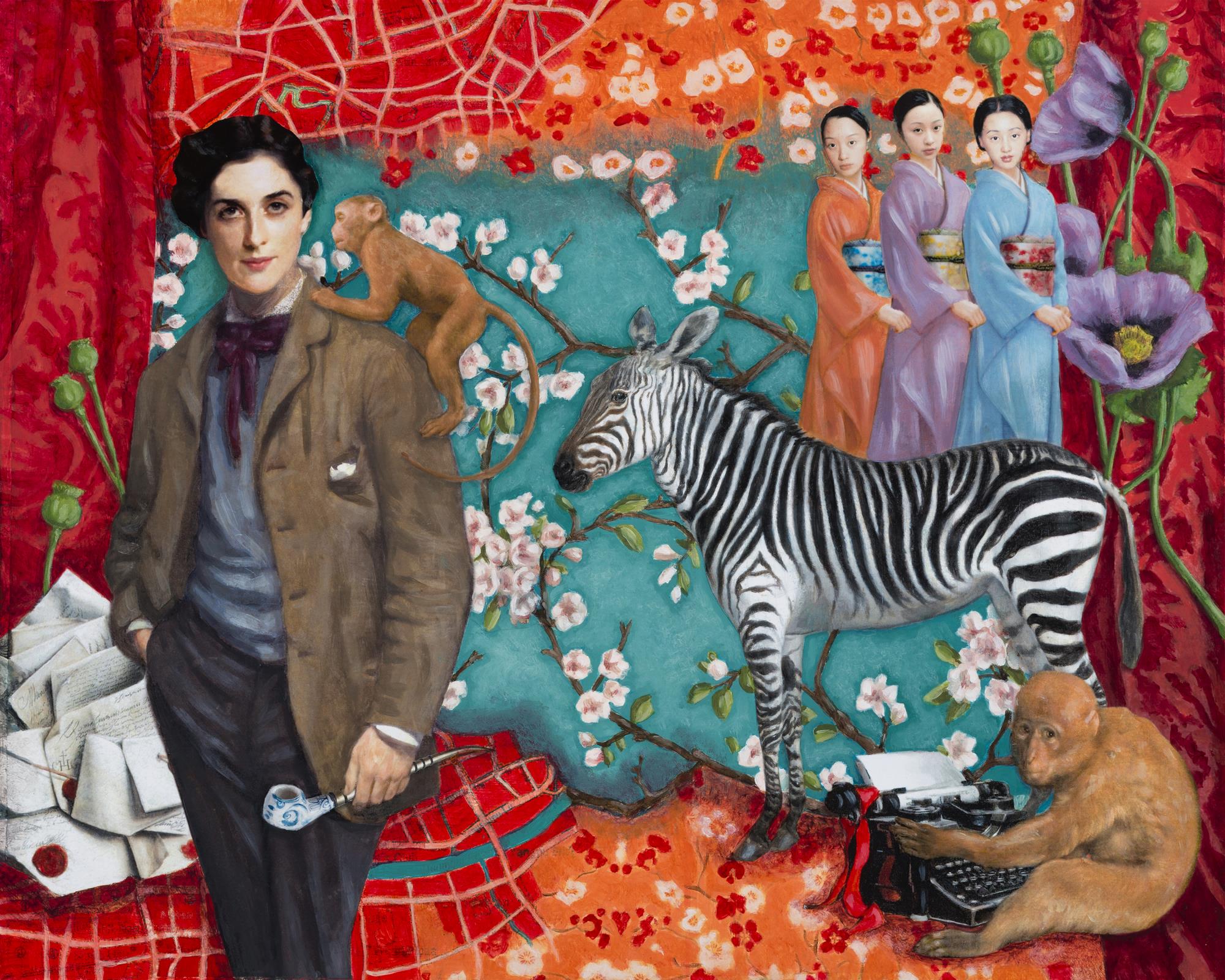 Emily Hahn 1905 – 1997: was an American journalist and author. Considered an early feminist and called "a forgotten American literary treasure" by The New Yorker magazine, she was the author of 54 books and more than 200 articles and short stories. Her novels in the 20th century played a significant role in opening up Asia and Africa to the west. Her extensive travels throughout her life and her love of animals influenced much of her writing. After living in Florence and London in the mid-1920s, she traveled to the Belgian Congo and hiked across Central Africa in the 1930s. In 1935 she traveled to Shanghai, where she taught English for three years and became involved with prominent figures, such as The Soong Sisters and the Chinese poet, Zau Sinmay.

In 1924, prior to graduating from mining engineering school, she traveled 2,400 miles across the United States in a Model T-Ford dressed as a man with her friend, Dorothy Raper. During her drive across New Mexico, she wrote about her travel experiences to her brother-in-law, who, unbeknownst to her, forwarded the letters she wrote to The New Yorker. This jump-started her early career as a writer. Hahn wrote for The New Yorker from 1929 to 1996.

The manipulation of images through collage intrigues me - I decontextualize, then, I reconstruct. I track down my ‘victims’ (images) and then rearrange their reality and reassemble their context.

Originally this practise utilised a hoard of printed ephemera gathered whilst on a long stay in Venice, where an abundance of cast-off museum guides and maps formed the daily floor-carpet of the city. Transposing these into a travel diary of sorts became an archival endeavour as much as an aesthetic engagement.

For me being creative is an inseparable combination of both the intellectual intention and the manual production. Past experience in art restoration cultivated a reverence for authentic techniques and materials - I currently only work on muslin covered boards primed with home-made organic gesso.

Over the last ten years this practise has developed. As we increasingly move toward a “paperless” culture beholden to digital forms another transposition has taken place within the work, in that the ‘collage’ elements are now sourced from ‘throw-away’ images on the internet, released from their pixels and returned to a version of their original form. What results is a mixture of seamlessly blended painted and collaged elements in what I like to describe as “intricate scenes of social malfunction” - a distinctive style of ‘antique surrealism’. Rearranged reality, assembled moments, and constructed views materialize in these mixed media works.

I am endlessly fascinated with how and why society functions, what ‘rules’ we accept to live by, where they are subverted and who among us is brave enough to pay them no heed. Working in series, my paintings investigate socio-political themes using historical comparisons to highlight contemporary issues. For example ‘The Savoy Series’ and ‘the Colonials’ investigate social attitudes to immigration.

The ‘No Man’s Land’ series celebrates remarkable people who have challenged gender stereotyping. The initial inspiration came from an article on Rose de Freycinet who joined her husband’s round-the-world scientific voyage illegally, dressed as a man. The discovery that I could find only one small likeness of her led me to wonder how many other unconventional historical figures had been similarly neglected and, ultimately, to start working on an alternative gallery of portraits.

Unsurprisingly, the series features many women who have dressed as men to pursue education or careers otherwise denied to them. There are also literary women, such as Amy Dillwyn and Florence Dixie, who used their own experiences to champion women’s rights. The series includes portraits of both men and women for whom gender identity was at best irrelevant and at worst significantly limiting to their personal freedom. All are united by their disregard for societal norms, for a variety of reasons and to a greater or lesser extent. For many of these advocates of freedom and equality, ‘doing’ was far more important than personal recognition or social acceptance, the antithesis to our current ‘selfie’ generation.